Annabelle (Annie) was born at about 38 weeks on July 14th, 2009 – she was a healthy 7lbs, 1oz and 19.5 inches long.  We were thrilled by her arrival, she was our first child and a first grandchild for both sides – to say she was highly anticipated would be a huge understatement!

Prior to even starting a family, we had undergone some genetic testing.  Annie’s Aunt Jenny had passed away young due to complications with cystic fibrosis, so I was tested for carrier status.  It was determined that I was not a carrier – and we happily planned to enter parenthood with “healthy” babies.

During my mostly “normal” pregnancy, a first trimester screening came back with an increased risk for Down ’s Syndrome.  After further testing, we were given 1:47 odds of having a baby with trisomy or a chromosomal disorder.  Since the risk for amniocentesis was much lower than our odds of having a baby with a serious complication, we went ahead with the amnio testing, when I was in my 19th week of pregnancy, to determine the health of our baby.  Waiting for those test results seemed like eternity.  I remember standing in our living room when I got the call with the results, and we were so relieved to be given the good news that our baby was perfectly healthy, no chromosomal issues …and the woman on the phone asked me if I would like to know the gender of our baby.  I politely declined, that was one surprise we had chosen to wait for and were enjoying the suspense.

The last half of our pregnancy was uneventful.  I was a healthy pregnant Mom, gained the normal amount of weight, was rarely sick if ever, worked and exercised up until the night I went into labor.  My labor started slowly during the day and by the evening of July 13th, even as a first time Mom, there was no denying this baby was ready to join us.

I had a fast and “easy” labor.  We got to the hospital around 9pm, and little Annabelle’s healthy cry was heard by 3am.  We quickly counted her 10 fingers and toes, noted her full head of black hair and marveled at how healthy our little girl was after all of the worry we had during our pregnancy.  We curled up as a family of three for one night in the hospital, and then we left for home as soon as we could.  We were anxious to just get home and be a family, Annie and I were doing great and had weathered the whole birth experience like champs, so less than a day and a half after she entered the world, we were on our way home!

Three days later we had a visit with our pediatrician for a checkup, on the way to the appointment, Annie spit up and I noticed that the spit up was yellow.  I asked the doctor about it, as I obviously hadn’t fed her anything yellow (we were just mixing breast feeding and supplementing with formula those first few days).  As a precaution, she sent us for an ultrasound to make sure there was nothing wrong with little Annie, so we drove straight to the hospital to have that procedure done.  While we were waiting for the ultrasound in the waiting room, the woman at the check in desk called for Annabelle’s family…and told us we had a phone call.  We were shocked, who knew to call us in a waiting room for a last minute appointment we had at the hospital?  Jeremy took the call and it was our pediatrician (also a good family friend), she told us that Annie’s newborn screening results had come back and that there was a chance she could be galactosemic.  I think we still have the piece of paper that Jeremy scribbled down g-a-l-a-c-t-o-s-e-m-i-c, we had never heard of such a thing, much less could we spell it the first time Dr. Kwak told us over the phone.  She calmed our nerves and told us, it was likely a false positive; galactosemia was very rare – but just to be safe we should discontinue breastfeeding and switch to soy formula until further testing could be done.  To keep the explanation simple – our doctor told us, that Annabelle would never have dairy products, if indeed she were galactosemic.

We went from the ultrasound back downstairs of the hospital to labor and delivery and begged for some soy formula samples, it was just three days after we had left there carefree with our “healthy” baby.

On the way home, I joked…surely the test was a false positive.  No one in either of our families had ever had any dietary issues; I couldn’t imagine life without ice cream and nacho cheese!  My grandmother had always said, “Fitzpatrick’s (my maiden name) eat anything that doesn’t eat us” 😉  We come from a long line of hearty eaters, imagining a life with dietary restrictions for my daughter just seemed impossible.

The next few weeks were a blur.  Annabelle became very lethargic and terribly jaundice shortly after we found out she could be galactosemic.  We were keeping her on a bilirubin blanket at home for 10 hours or more each day and making daily trips to the lab in the hospital for heel pricks to test her bilirubin level.  We also had our first geneticist visit where further testing was done to determine officially whether or not Annie was galactosemic.  I remember sitting in that tiny, cramped exam room with my barely week old baby, a geneticist, a dietitian, and a genetic psychologist.  They were busy getting our family history and preparing us for life with a child that had a metabolic disorder, and I was still in denial.  There was no way these strangers had any idea what they were talking about.  We ruled out cystic fibrosis before pregnancy, we ruled out chromosomal disorders during the pregnancy, we gave birth to a beautiful, healthy baby girl…how could there be something “wrong”.

We left that appointment overwhelmed and spent the next week waiting for the last of the test results, hoping all the while for a miracle, a false positive…

On July 27th, when Annie was 13 days old – we got the call, she was indeed galactosemic.  I was devastated, I spent days just holding her and wondering if she would ever walk, or talk, or even live to see preschool.  There was so much about galactosemia we had to learn, we didn’t know a thing.  Information we found online talked of mental retardation, liver failure, learning disabilities, cataracts…so much to overcome.

We got to work educating ourselves, and were very lucky to find local galactosemic families in our area.  The support from those contacts was incredible.  Meanwhile, Annie ate (soy only thank you) and grew.  She rolled over, she sat up, she started her first foods, she said her first word, she took her first steps – and at the time that I write this Annie is two and a half years old.  She has been tested by early intervention since one year of age, and every time has scored off the charts.  She speaks well, reads well, and does all the things a “normal” two year old should, if not more.  We have adapted to her diet, and what once seemed tragic (no ice cream?) is now routine.

Annabelle is also a big sister now.  We recently welcomed her little sister, Emeline, on February 28, 2012.  The hospital where we delivered little Emeline was incredibly helpful in ensuring her healthy arrival.  We did not know if baby number two would be galactosemic prior to birth, so we coordinated with Annie’s geneticist, pediatrician, and the hospital staff to have testing done immediately.  Emeline was cared for as if she were galactosemic until we had results back confirming one way or another.  Forty-eight hours after our second daughter was born, we were told that she is not galactosemic, but a galactosemia carrier.

Both of our girls are happy and healthy – and we are thrilled to be a family of four.

To new galactosemic families reading this story for guidance: surround yourself with supportive contacts, educate yourself the best you can, and most of all, relax and let your child be your guide.  I did nothing but worry about Annabelle, and she has done nothing but surpass any expectations we ever would have had for her, galactosemic or not.  We most certainly have challenges ahead we can’t foresee, but we have learned so much in two short years, most importantly that:  change is ok, dairy isn’t that great anyway, and “potential complications” are just that…potential, not guaranteed. 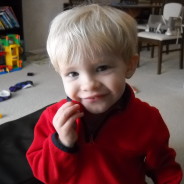