At Ava’s 20-week ultrasound, a suspicious “mass” was discovered by her OB-GYN during a routine appointment. After many visits with maternal-fetal medicine, doctors were split between diagnosing her with a tumor or spina bifida.   We decided to leave our then 4-year old daughter (with Nana & Papa) for a 5-day trip to for a second opinion at CHOP in Philadelphia.  The doctors confirmed the tumor diagnosis and recommended that it be removed soon after her birth. Our family did so much to “prepare” for Ava’s arrival and possible medical needs. We made plans, back up plans, visited the NICU, and met with the surgeon while we handled the typical “pre-baby” preparations. We had no idea that something dramatically different was about to happen. When she was born (May 26th, 2010) via C-section, it surprised everyone in the room that they did not see anything tumor-like on her body at all! After more tests, her surgeon decided that she did not have a tumor but a cyst. Much to our relief, she did not require immediate surgery.  We were ecstatic that we could take her home in a few days.  As the time to go home grew closer, Ava became jaundiced. The hospital staff gave her the bilirubin lights and blankets and prepared us to take her home (even though she wasn’t improving a whole lot). After a very dramatic extra day in the hospital, we made plans to go home.  When the NICU nurse came to give her a final bilirubin test, she knew something was not right with our daughter and demanded she be returned to the NICU. She was cold, lethargic, had a dark stomach, and her blood sugar was high. Once she was re-admitted to the NICU at Edwards Hospital, the staff had no idea what was wrong with her. She was given a spinal tap, treated for a number of “possibilities”, poked and prodded over and over. After about a day of research, calls to specialists, and rushed test results (this all happened over Memorial Day Weekend), the doctors were 99% sure that Ava had “classic galactosemia” (although the official results weren’t back yet). Once the diagnosis became final, Ava required multiple plasma transfusions and spent a full week in the NICU. She finally had surgery to remove her “cyst” in December 2010.

Our reaction to the term galacatosemia was one of relief. There was finally an answer to the cause of our daughter’s sickness and we were ready to move forward and learn as much as we could about this genetic disorder. Ava’s cousin Annabelle had been diagnosed with Galactosemia only 10 months earlier! We were so lucky that we could look to family for support, especially as we tried to figure out how to incorporate her diet into our vegetarian lifestyle.

As I write this for the first time in 2012, Ava is now almost two years old. She is making such strides in her development (she began speech and physical therapy at 4 months of age) and it is so wonderful to see her unique personality develop. 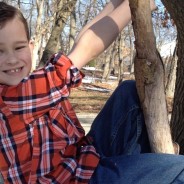 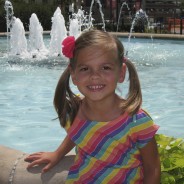